Jonah fell last week on the sidewalk at school and caught himself with his hands. It was bad and he took all the skin off his palms. He fell because he was skipping because he was happy. He is all healed up now, but for four days, he could barely use his hands, and for seven, they were bandaged. 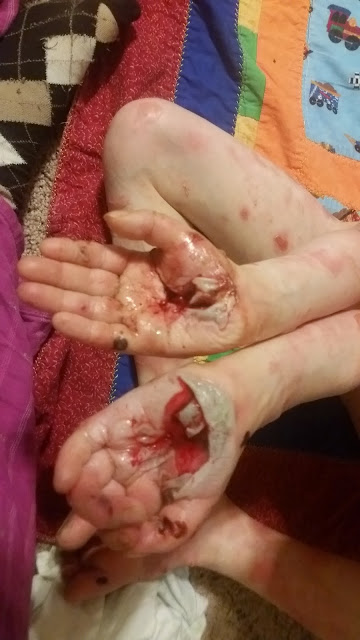 After a couple of "good" days, he woke up this morning with a corneal abrasion unable to open his eyes. We spent the whole day in the dark and will probably spend the next two days like that as well. 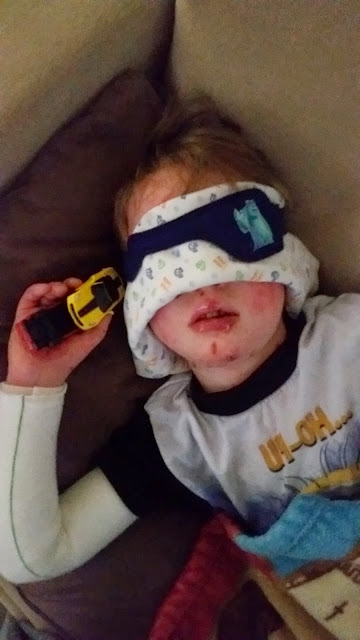 So needless to say, it has been a rough couple of weeks in terms of his EB and the pain he has been in. BUT this is my Facebook status tonight and it goes for you guys who faithfully read this blog too... even though I only post once a month... :)

Although I HATE EB and all it has done to my Jonah the last two weeks especially, I am overwhelmed (and sporadically in tears) over how incredibly loved we are. To know you guys are praying for him, thinking about him, asking how you can help... it's so good. His Kindergarten teacher, Ms. Pabon came over this afternoon, after teaching 11 other kids all morning, to visit with him and bring him audio books (and a casette player because ours is in storage), Grandaddy brought us milkshakes and told him approximately 107 stories, his other Kindergarten teacher, Ms. Boone called tonight and let him chat her ear off for 20 minutes to break his monotony, and Mimi Marykay came tonight with a stack of books to read to him (by flashlight because we had to be in the dark) and spent a long time entertaining both boys. So as much as I hate EB, I think about how much we might be missing out on if we weren't forced to slow down and let ourselves be loved. It's an important thing. To ask for help, to let people into your life, to be real with each other. To be vulnerable. I'm thankful for the hundreds (thousands?) who love and pray for us. And I'm thankful to know it. Fully.

I am so humbled by this kid, and all that he has to endure. Just when we think we have it bad... I send nothing but love, and positive, encouraging, and uplifting words for that sweet boy. I don't know what else to say other than he is truly an inspiration to me. <3 Love to each of you.

Jonah is the bravest boy I know. His mom and dad are just a tiny step behind. Jonah you are loved by God and by so many others. (((hugs)))) from Canada

Praying for this special boy. Your comment about letting people help has made me think. I have two medically fragile special boys and that is something I have a really hard time with. Thank You for posting about your family.

Oh Patrice, my heart just broke reading this and seeing his hands and his eye all bandaged. He's so fragile yet he's SO brave and strong. I'm so glad you have an amazing support system. I'm always thinking of you guys and praying for you all. Thank you for posting an update. I will specifically pray for healing of his hands and eyes. I wish I could give him a hug, sweet boy. Hang in there and sending love and hugs for strength and support. God bless. xo

I miss your blogging. I have loved sweet Jonah since day 1 and I am so amazed at the amazing, brave, and sweet boy he has become. I love his little voice and his spirit. Y'all are amazing parents. I think often of that video you posted of your husband rocking Jonah and singing Do not Fear to him. That video has always made me wish I had been raised by Godly parents. Hope his eyes heal fast. Thank you for the update! Katherine

We think of you all often! So sorry that he has to endure all that, the pain on his hands must be intense but what a brave boy he is and a brave mama you are to care for him so tenderly. Praying for you guys!!! Thanks for sharing so we know better how to pray.

How are his eyes today? Also, is there any update on your other son and his adoption?

Please tell Jonah that he is a superhero! And I have 2 little boys at home so I know what I'm talking about! Every time you blog it serves as a reminder to pray for Jonah, to thank God for our blessings even in difficult circumstances, and to praise Him for His loving plan in Jonah's life - even though I'm sure it can be hard at times to see that plan from our side of Heaven. He is touching many lives and many hearts. May God bless you all.

I have read your blog for several years and will continue to pray for Jonah...he is a very brave little boy with very wonderful parents.

Yahweh, Abba Father,
Thank you that there is a cure for EB, and it's called Yeshua HaMashiach (Jesus, the Anointed One). Jesus received 39 lashes on His back so we could be healed. I say to Jonah's body that it is healed by the stripes of Jesus (1 Peter 2:24) You sent out Your word and healed Jonah (Ps 107:20) EB, you have to bow your knee to the name of Jesus Christ, and leave Jonah's body now in Jesus name. Father, there are so many accounts in the Bible were You healed people, and that included skin conditions so I praise You for Jonah's complete healing. I proclaim today that Jonah is healed by Jesus, and his skin won't show any signs/scars of EB. Thank You that Jonah will enjoy meals, and he will be able to chew his food and it won't damage his esophagus. There will be nothing missing or broken in his body in Jesus' name. Thank You for Your love for Jonah and thank You for the plan that You have for his life.

I also pray for the adoption process. Ministering angels, deliver the paperwork to the necessary people, and bring in the necessary funds. I pray for a smooth process, and for peace that passes understanding.

Father, thank you for the testimonies that Matt and Patrice will have about these two things.

We expect to receive LORD.

Thinking of you guys today & hoping Jonah is feeling much better.

Though I don't follow this as closely as I once did, I have been reading your story/blog since Jonah's birth. It is so good to see how well he does in general, considering those first weeks, months and year/s. You and he continue to inspire me, and I will continue to send prayers up for all of you. Go Jonah!

I hope Jonah is doing better!! Any update? I hope all is going well with Baby G also!

I have followed Jonah's story for a while. I saw this story on our local news and wanted to share.

I have followed Jonah's story for a while. I saw this story on our local news and wanted to share.

Been thinking of Jonah and your family. Hope Jonah is doing better...hadn't seen anything and just praying all is better. Love to you and your sweet family.

Catching up on your blog while in Nicaragua. Jonah makes my heart smile and to finally see Gideon's face filled me with joy for yall! Continuing to pray as I have for 6 years. Many blessings to you and your precious family !