We are finally home. We decided to go to Matt's parents in Florence on Saturday instead of fighting beach traffic and having to tube feed Jonah on the road. I liked being away and our moments of vacationing, but it was great to walk in the door and just be home. Jonah could feel it too. He was so excited to get home, and when he saw Deac, he said, "Deac. Deac. Deac." as clear as can be. He's also started saying "ball" this week, imitates saying "tickle," and I'm pretty sure he knows he's talking about/to Matt when he says "da-da" now.

He had another huge raw spot on his left leg, but down lower on the calf, so we were confident in our decision not to go in the pool. It ended up not mattering though, as it rained Friday morning.

Our last pool pics from Thursday. 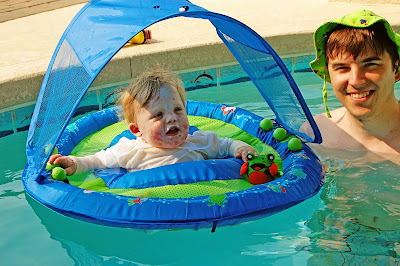 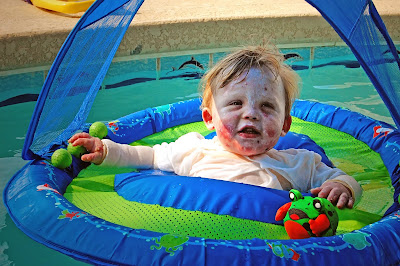 On Thursday evening, we got to go on a short walk. It started thundering while we were out though, so we didn't go far. Too much to risk with the possibility of wet bandages. I think Jonah enjoyed it, but he was tired, so he was pretty solemn looking the whole time. I don't think he smiled once... but he didn't fuss either. 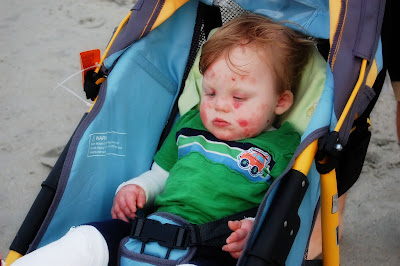 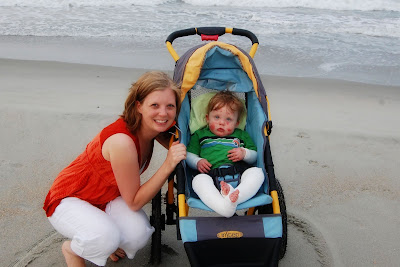 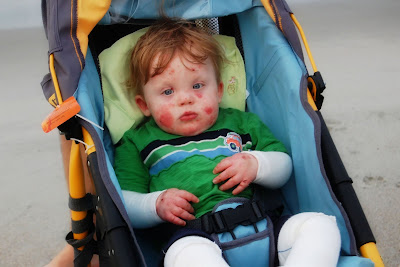 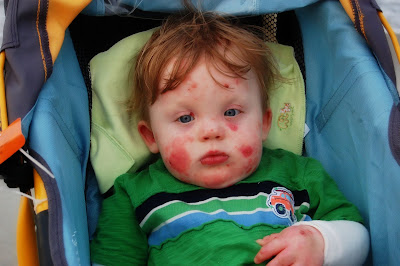 Like his mommy, he finds it hard to just sit back and relax. 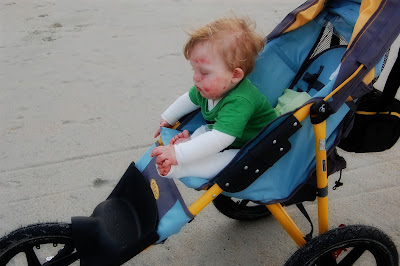 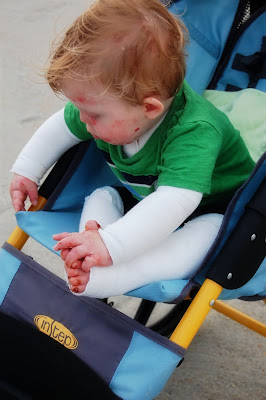 The back of our beach house. It has eight bedrooms and lots of kitchen, dining, and living space, which is great for our group. We had 17 adults and 13 kids. 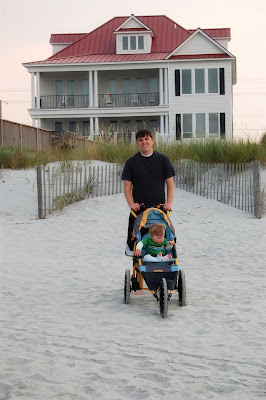 Okay, I'm fully aware that this sounds crazy, but I'll tell you anyway. Matt's parents and sister watched Jonah on Friday afternoon so that Matt and I could do a little shopping at the outlets. While we were out, Matt's mom called me. She said that Jonah had been watching an episode of Olivia and she was counting. She counted to seven, and before she could finish, Jonah said, "eight, nine, ten." !!!!!!! Yes, I know. He's been watching a Curious Buddies DVD (Let's Move) all week during dressing change, and there is a part where they rest and count to ten twice. I also counted the stairs every time we went up them at the beach this week (we were on the top floor). So he's definitely heard counting and likes the rhythm of it. Kim (Matt's sister) caught it on video twice, and they said he did it over 20 times. I don't necessarily think it sounds like "eight, nine, ten" but you can definitely tell he's trying.

Where did my BABY go???
Later that night, we went to eat at Chesapeake House with Matt's parents and Kim's family. There is an alligator that hangs out in a body of water just outside the restaurant. We went out afterwards to get a closer look. Matt reached his phone out over the fence to get a photo, and Abby, his niece, accidentally knocked it out of his hand. So there's the alligator right at the edge of water (people were feeding him), and Matt's phone halfway between the WRONG side of the fence and the water and, you know, the alligator. I was down at the other end of the fence trying to keep Jonah out of the middle of the crowd. All of a sudden the alligator JUMPS, hisses, and spins around out into the water. The crowd screams, and lo and behold, MY husband has jumped the fence, you know, IN with the alligator, to retrieve his phone. Thankfully, the alligator decided to go away from him instead of toward him. Matt was fast and back over that fence so quick, but what an idiot. And I mean that with love, of course. At first, Matt said, "Who's faster, me or the alligator? (as in I'm faster)," and I quickly said, "the alligator." The more he's thought about it, the more he realizes what could have happened. Now he keeps saying, "In hindsight, that was probably a poor decision." Um, yeah. Anyway, funny story to tell now, but holy cow, that could have been bad. So that was our drama for Friday. Counting and Alligators.
Jonah was AMAZING on the trip. I can't say enough about how wonderful he was. He only got fussy if he got overly tired. He was a little whiny and clingy the first couple days, but he soon snapped out of it, and was so much fun. He did not sleep a wink on the three hour trip home today, and he did not cry once. Just laughed and played and watched Gabba. He is so amazing. I'm honored to be his mommy and so thankful for all the memories I get to make with him... even the ones where his daddy almost gets eaten by an alligator. Yep, even those.

He is adorable!!!! I love that little voice! :) thanks for sharing.

He WAS totally amazing at the beach! What a true champ. I loved every minute with you guys!

Jonah is so cute and his little voice counting is too precious.

Glad you had such a good vacation and you were able to enjoy yourself too.

He is so amazing, and it is wonderful to see the love your family has for him. So precious! I'm glad you had a great vacation.

What a smart young boy you have there!! Jonah is looking fantastic!! Ummm as for hubby that was not the smartest thing he has done this year at all. What if it was a speedy gonzalas gator?? God was looking out for him for sure. I sure hope his phone was worth the trouble.

Awwww I love that video. What a smart guy you have!! I love how he looks at Grandpa.I also love the first look on the video, "the camera is out, I will NOT do tricks for you." I get that look a lot. I am glad you had a nice week at the beach.

He looks SO much like you in that photo on the beach!!

and he SO gets it. He knows that 8,9,10 comes next, and maybe he can't totally articulate it perfectly but he gets it!!!! He's a smarty pants, your little boy!

So very glad you had a good time.

Hi Patrice:
So glad that you had a great time on vacation. It is nice to get Home though.
Jonah is looking wonderful and boy he sure is smart. Love the pictures and the updates. Take care and give Jonah a gentle hug and kiss for me. Love you guys. Love Leah's Nana

That was totally 8, 9 10! What a smart little cookie! The look on his face is hilarious when you all are cheering for him : )

Where DID your baby go??? That is too cute.

Let's hope '1' is the total number of times Matt jumps in with an alligator to give you blog fodder!!! JEEPERS.

I love, love, love the sweet sound of that little voice. Sounded like eight, nine & ten to me.

I bet Deac was glad to see Jonah too.

Great to know that all of you had a wonderful vacation.

I hear 8,9,10 pretty clearly there!! Have to say I love how he just kinda looks at you cheering like you're nuts though - that totally made me laugh!!

We love eating at Chesapeake house and feeding the alligator. So glad that Matt made it back over the fence safely!

Jonah is so precious!!!!

I totally believe Jonah was counting. All the specialists can say all they want not to let little ones watch tv, but my little who is 2 1/2 has watched Noggin for about his whole life and I know it has taught him to count and his colors and who knows what else. I counted the steps too with him when he was litte and would only go to 5. One day, he just kept on going. Now its 11,12,13,14 almost to 20 on his own. Keep on doing what you're doing because it's working.

Glad yall had a great vacation.

Sweet as always - am glad you all had a good vacation, and that Matt and his phone did not become the alligator's dinner!!

The pictures are all SO cute! Looks and sounds like y'all had lots of fun! I get fussy if I get overly tired too :) Glad you're home safe with lots of great memories. Don't have the internet speed to watch the counting video but plan to come back and see your genius baby when I do!
Blessings.

So I was sitting here looking at the cute pictures of your son in the pool and wondered to myself...I know that a chlorinated pool leaves my sons skin in terrible shape. But, a Salt water pool has done wonders for our son who has a skin problem. So I just happened to Google Saltwater pool, and EB and guess what came up..the Debra website. Some people have actually found that it helps. So Then I was like--(Wow if it works as well on EB kids as it has on our son now to get Jonah an indoor Saltwater pool!) WINK

And Jonah is brilliant AND adorable!

I think that was pretty clear! It totally counted! Yay, Jonah!

Oh so proud! great job Jonah your so smart.

Loved the video! Jonah looks like he's thinking "jeez....it doesn't take much to excite them....they just have trouble counting past 7, and I was helping them out, and it just tickled them to death. Silly grownups."

Your boy is just the sweetest thing!! Love his sticky up hair :)

That was clearly 8,9,10!!! Amazing! I love how he was intently gazing at his grandpa's eyes! That was special!

Matt's crazy with that alligator move!! But glad Jonah was a good boy on your vacation!!

My cousin tried to tackle that same gator at the Chesapeake House back when we were kids (20+ years ago so it probably isn't the exact same gator, but still). Thankfully, his mom & uncle stopped him before any damage was done. I remember it like it was yesterday. Glad you had a good time at the beach! You all deserve a great vacation!